Cops Off Campus and Out of Our Unions!

A Report from PSC CUNY’s Rank-and-File

I am writing this from NYC’s occupied City Hall listening to an abolitionist speech along with a larger crowd than I had thought possible. The occupation is a large and vibrant thing with a massive range of proposed solutions to police violence scrawled on cardboard, voiced in impromptu debates, and outlined in mass teach-ins. These solutions range from punishment of individuals involved, to training overhauls, to major budgetary revisions, to total abolition of policing and the capitalist property relations it protects. But what this diverse and occasionally contradictory set of possibilities share in common is that they are all universally opposed by police unions who have amassed incredible power and vociferously wield it to stymie even the smallest symbolic checks on their utter impunity.

That is why I am incredibly glad that the union I am a part of, the Professional Staff Congress (PSC) at the City University of New York (CUNY), voted not only to kick the cops off campus but also to drive the cop union out of the AFL-CIO, the national labor federation with which our parent union is affiliated. Before the June 25 delegate assembly where we voted on it, union members working in Rank and File Action drafted the resolution with these clear demands. The union leadership, who has regularly taken more conservative positions on a range of issues, offered a substitute resolution that expanded some language but dropped the demand on expelling the police unions. A rank-and-file delegate amended it back in and the complete resolution overwhelmingly passed. This is an early step in a larger struggle but the victory shows that in moments of mass struggle rank and file members can push forward radical demands.

What this diverse and occasionally contradictory set of possibilities share in common is that they are all universally opposed by police unions.

Having the cop unions in our labor confederations does direct harm to Black people and to us all. They are the first line in defense of murderous officers, keeping killers–including those that murdered Breonna Taylor–in their jobs and on the beat. They also block any changes to the system of policing: in the 1990s the police union reacted to a civilian oversight board by instigating a cop riot– an action that not only gutted the already meager reform but was a key part of Giuliani’s rise to power. By having cop unions with us, our dues and whatever political power that the labor has built up over decades is used to protect and expand an institution that is designed to violently oppress Black people and facilitate the exploitation of the working class. That’s why Black Lives Matter activists have criticized police unions for years including in 2016 when Black Youth Project 100 NYC occupied the lobby of a cop union. It is egregious that unions that represent us so often refuse to fight against cop unions and actively expand police power by participating in labor confederations with them.

Any labor leader attempting to claim solidarity with the Black Lives Matter movement who does not confront the pernicious role of cop unions in perpetuating police oppression is not helping, and their symbolic gestures and statements are empty. Thankfully, the current mobilizations against the police, begun with riot and rebellion in the streets of Minneapolis, have brought the question to the fore. While the AFL-CIO leadership have already made their reactionary position on this clear by tweeting about police being entitled to collective representation, their being forced to even make a statement on police union membership owes a lot to rank-and-file disillusionment and pressure. Other labor bodies, including the Martin Luther King County Labor Council in Seattle, have broken with the cop unions and even the large and powerful SEIU is currently considering it.

Police unions drag the whole labor movement to the right. They are institutionally incapable of solidarity. In a 1970s New York facing crushing austerity, the police union famously distributed fear-mongering fliers to keep their funding off the budgetary chopping block while leaving everyone else in the labor movement and the working class out in the cold. They kept their jobs and their endless supply of killing tools, while the rest of us lost jobs, public hospitals, tuition-free CUNY, and so much more. Their presence dilutes or distorts the demands and the actions that could be made by a unified working class. There has been some welcome talk of strikes or even a general strike to support the ongoing rebellion. But partially because of the presence of police unions even broaching the topic within the national labor federations, whose strike funds and massive communication networks would make such a task so much easier, is almost impossible.

No. Kick their unions out. Strike against them. Cut all their funding. Abolish them. And build a better world on the ashes of their fake union hall.

David Klassen is an adjunct teaching Latin American history at Borough of Manhattan Community College and a member of Rank and File Action (RAFA). 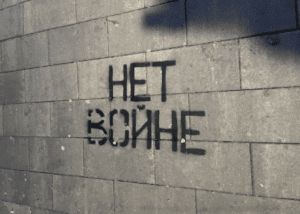 Inside the Russian Resistance Against Putin’s War 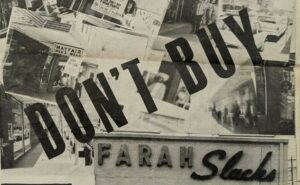 Fifty years ago, thousands of garment workers along the U.S.-Mexico border launched a two-year strike and boycott at Farah Manufacturing. Gabriel Solis draws lessons from their struggle for social movements on the border today. 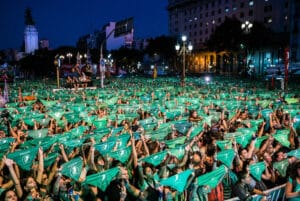 Now is the time for a new, militant strategy in the face of the radical right’s attempt to eradicate the right to abortion in the United States.