A Speech from ILWU's Juneteenth Strike

In honor of Juneteenth today, the International Longshore and Warehouse Union (ILWU) is shutting down every port on the West Coast today, refusing to process cargo. From its inception in the 1930s, the ILWU has always refused the false distinction between anti-racist struggles and class struggles, as if anti-racist struggles aren’t central to the project of working class formation. Indeed, at the time of its founding, the ILWU was one of the few unions that actively attempted to desegregate the labor force. When it split from the International Longshoremen’s Association (ILA) in 1937, one of the key points of contention was the question of anti-racism as an organizing strategy. The ILA had formally desegregated, but it retained a race-blind “universalist” politics, technically opening its ranks to anyone, but doing little to actually recruit Black workers. By contrast, the ILWU actively waged anti-racist struggles, building its Black membership and truly living up to the slogan, “An injury to one is an injury to all!”

For three quarters of a century, the ILWU has continued this tradition, refusing cargo from apartheid South Africa for three decades, organizing port shutdowns in defense of Mumia Abu-Jamal, against the imperialist war in Iraq, against racist police violence after the murder of Oscar Grant, in solidarity with Occupy Oakland, and now, today, in solidarity with all of those revolting against the white supremacist institution that we call “the police.”

In tandem with this labor action, a mass march will be held in Oakland today. Featured speakers include Angela Davis, Boots Riley, Oscar Grant’s Uncle Bobby, and the president of ILWU Local 10, as well as a number of longtime organizers in Oakland. Among these speakers is Gerald Smith, an erstwhile Black Panther and longtime organizer in Oakland. As Gerald told us on the phone last night, “Anti-racist struggle is the bread and butter of class struggle. It’s no coincidence that Black militancy often initiates wider class struggles. If the point is for everyone to get free, of course we start with the most oppressed section of the working class. That should be basic. That’s why tomorrow’s struggle is so important for the working class. That’s why the struggle against police brutality is so important for the working class. Anti-racist struggle is class struggle!”

Below, in honor of today’s shutdown and Juneteenth, we present the text of Gerald’s speech at today’s rally.

Thousands have joined us in this quest for justice against police brutality and terror. From the masses, the demand to defund the police has finally become popular. But what does this really mean? Cut the budget here, chip chip here, snip snip there? Or just get rid of the damn police altogether? I’m for all of it. The Oakland Police Department consumes 40 percent of the city’s budget – far more than they deserve. Their conduct, attacking and gassing peaceful protests, reveals that maybe we don’t need the bastards. 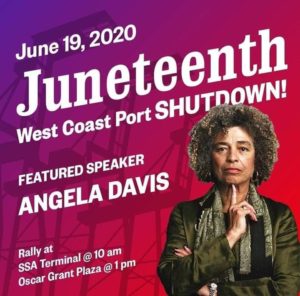 But right now, the majority of citizens still feel that they want to have a police force. They still hold illusions that the police will protect them. I’m not sure what it will take to prove otherwise.

Recently, a criminal gang ripped off fifty Mercedes Benzes from a dealership here. How do you rip off fifty cars? Either the police were a part of the scam, or they’re totally, irredeemably incompetent.

The same cry emerges from the heart of the masses when it comes to our prisons. We, of the Labor Action Committee to Free Mumia Abu-Jamal, are working with young people who want to abolish the entire prison system. We know why, and we sympathize with these young people.

Together, we have built a campaign based on the slogan, “No state execution by COVID-19 in the prisons.” What we mean by this is that a conviction should never equal a death sentence. The people currently in our prisons are sitting ducks. For example, in Marion prison in Ohio, 80 percent of the prisoners have acquired the coronavirus. 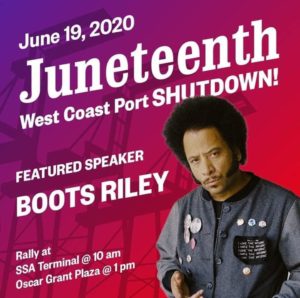 On June 6, we rode down to Avenal state prison, 3 hours from the Bay Area. Many of the people in our thirty-car caravan had family members inside of this penitentiary. When it became known that 800 people inside this prison had COVID-19, people burst from their cars and ran to block the entrances and exits of the prison.

I’ve never seen anything quite like this. It was totally spontaneous, because we had planned to stay in our cars. No, there wasn’t no social distancing, but I joined in nonetheless. Eight hundred people with COVID-19 locked away in this prison. Needless to say, the authorities don’t want to let anybody out because they get 70,000 a year per head. Remember, this is the Prison Industrial Complex. They make money from our suffering.

Tomorrow we’re going back to San Quentin to continue our struggle. We urge you to come join us!

Below we present video footage from ILWU Locals 10 and 34’s port shutdown and caravan on May Day of this year.

Gerald Smith is a longtime activist in Oakland, California. A onetime Black Panther, he is a founding member of Copwatch, the Oscar Grant Committee Against Police Brutality and State Repression, and the Labor Action Committee to Free Mumia Abu-Jamal.