Time for Mass Struggle in Defense of Reproductive Rights

We are at a turning point in the struggle to defend abortion rights. The leak of the Supreme Court’s draft ruling threatens to overturn Roe v. Wade. If and when it is enacted, nearly half the states in the US are poised to criminalize abortion. This ruling is an attack on much more than abortion rights; its logic opens the door to attacks on contraception, gay marriage, trans rights, and many other reforms won by oppressed people in our society.

How can the socialist left, reproductive rights organizations, and unions stop this decision from being implemented? And what we are going to do reverse it if it is enacted? The hard truth is that the mainstream reproductive rights organizations’ legal and electoral strategy has failed to stop this onslaught, let alone expand reproductive rights. We need a new strategy, one focused on the power of working and oppressed people to disrupt “business as usual” through mass direct action: sit-ins, walkouts, and strikes. This sort of militancy won abortion rights in the US fifty years ago, and in Chile, Argentina, and Ireland in recent years.

Unfortunately, the leadership of the mainstream forces are doubling down on the old, failed strategy, focusing all their energy on voting for Democrats in the midterm elections. The task of building effective resistance falls to the radical left, the Democratic Socialists of America (DSA), clinic defense groups, reproductive justice activists, and dissident forces within established organizations and unions.

To chart an alternative way forward we must first understand why we have arrived at this moment of crisis. We must explain how an unelected, right-wing court could even consider criminalizing abortion, when a majority of the country, including in so-called red states, overwhelmingly support Roe. Two factors are key: the unrelenting determination of the far right to win and the mainstream reproductive rights organizations’ defensive retreat.

The far right has been focused on criminalizing abortion. They have built serious organizations with a militant minority that has organized a real movement and funneled it into the Republican Party. They have transformed the GOP, historically the main political party of capital, into a far-right party of the middle classes. Our opponents have used family values and the anti-abortion crusade as a false, but appealing solution to the crisis of social reproduction in the middle and working classes wrought by the bipartisan program of neoliberalism. They advance the criminalization of reproductive rights and all forms of non-binary gender practices in order to restore the idealized “traditional” family (which never actually existed) as a “haven in a heartless world.”

The GOP has ridden this message to electoral success since the 1980s and has doubled down on it since the Great Recession, with Trump forging a misogynist pact with the anti-abortion fanatics. Once in office, the Republicans have implemented increasingly aggressive anti-abortion measures at the state level, proposed similar bills in Congress, and packed the courts, including the Supreme Court, with anti-abortion judges. Their strategy has worked, despite the party’s lack of a popular base, thanks to the systematic gerrymandering of electoral districts, restrictions of voting rights, and mass popular disillusionment with the Democratic Party’s failure to address the social crisis.

The main constituency for the far right’s war on women, LGBTQ+ people, and racially oppressed groups is downwardly mobile small business owners and low-level supervisors, as well as a minority of older, white workers. The capitalist ruling class has taken an ambivalent position on abortion, allowing the middle-class right greater political influence. On the one hand, capitalists support legal access to abortion and contraception in order for more and more women to be available for exploitation as wage labor. On the other, capital’s neoliberal agenda embraces the defense of the “traditional” family to enforce privatized social reproduction with the household—and women in particular—taking responsibility for all the labor of life-making. This agenda has led at least some sections of capital to back the criminalization of abortion.

In response to the far right’s assault, the mainstream reproductive rights movement has followed a strategy focused on defensive legal struggles and electing Democrats. It has failed disastrously. With the courts packed with right-wing judges, legal cases have yielded few new gains, lost ground as the courts placed ever increasing limits on abortion, and now have arrived at total defeat with the imminent overturning of Roe.

The mainstream organization’s electoral support for the Democrats has produced the same abysmal results. The Democrats incorporated their leadership as they did the leadership of other social movements coming out of the 1960s and 1970s, promising a defense of Roe as the status quo in return for support for the party and its candidates. In this process of what Olúfẹ́mi O. Táíwò calls “elite capture,” identity politics was transformed from a radical challenge to all forms of exploitation and oppression into competitive interest group politics dedicated to diversity, inclusion, and equity in the ruling elite. Meanwhile, the Democrats implemented social austerity, hammering the working class in general and oppressed groups in particular.

In response to the far right’s assault, the mainstream reproductive rights movement has followed a strategy focused on defensive legal struggles and electing Democrats. It has failed disastrously.

With the class and social movements in decline in the 1980s and their leadership assimilated, the Democrats took their support for granted and capitulated to the right. The Democrats accepted increasing limits on the right to abortion, beginning with the Hyde amendment in 1976 that barred federal funding of abortion. Bill and Hillary Clinton consolidated the Democrats’ surrender, declaring abortion should be “safe, legal, and rare”—the polar opposite of the radical call of the 1970s for “free abortion on demand.”

Even when they had command of both houses of congress, Clinton, Obama, and Biden all refused to make abortion rights the law of the land, made one concession after another to the anti-abortion right, and oversaw the dramatic erosion of abortion rights. As a result, the far right was free to go on the offensive, driving abortion providers out of most counties in the US and laying siege to the remaining ones. Its GOP representatives in state governments placed greater and greater limits on the right to abortion and prepared trigger laws to outlaw it once Roe is overturned.

The mainstream reproductive rights organizations’ strategy has weakened the movement and disoriented its cadre. Its organizations have become “NGO-ized,” dominated by professional staff, lawyers, and campaign consultants. Lacking grassroots, militant membership, reproductive rights groups have accepted the Democrats’ compromises in a desperate attempt to preserve what remained of Roe. As resistance was demobilized, the right was emboldened and stands ready to ban abortion in half the states in the country.

Even worse, the mainstream organizations have opposed new forces with more militant strategies. NOW, NARAL, and Planned Parenthood have all opposed clinic defense—a key arena for building militant resistance—and actively campaigned to prevent such actions from even happening. They refuse to champion a more radical agenda that would win support among working class and women of color—a program of reproductive justice and universal healthcare.

The mainstream organizations and their leadership show no sign of drawing the obvious conclusion that their strategy has failed. While organizations like Planned Parenthood have organized local protests, they have not called for either a national march on the Supreme Court, militant clinic defense, or called for defiance of laws criminalizing abortion. They are instead focused on the elections this fall, in the unrealistic hope that Democrats will win the midterms and pass national legislation making the right to abortion the law of the land.

The Democrats will milk the threat to abortion rights for all it is worth. Indeed, the leaked draft ruling was a gift from heaven for Biden and company, who were otherwise headed for disastrous defeat in the midterms – largely a result of their failure to deliver on their already inadequate promises. While the defense of Roe gives the Democrats something to run on in the midterms, the party cannot stop the ruling and is unlikely to win the fall elections. And even if they did, it is not at all clear that they would deliver on their promise to make Roe the law of the land. Simply put, the party has proved itself unwilling to do anything to defend (let alone advance) reproductive rights, especially federally funded access, since the 1970s.

Now is the time for a new, militant strategy. The majority of people in the US do not want Roe overturned and are shocked and outraged by the draft ruling. This anger can provide the basis for building a movement. Among the first steps would be local, emergency meetings to bring forces together for a new strategy of mass direct action to advance a radical program of reproductive justice. It was this sort of organizing that built the struggles that won abortion rights in the US in the past, and in Argentina, Chile, and Ireland today.

While the old reproductive rights organizations are at an impasse, new forces have stepped forward to organize resistance. These include militant organizations like New York City for Abortion Rights, Chicago for Abortion Rights, National Women’s Liberation, forces on the socialist left, and left-led unions like CTU, which has issued a statement in defense of abortion rights. DSA, the largest socialist organization in the US since the 1940s, could play an enormous role in the process. However, its national “strategic focus” on electoral politics has to this point sidelined organizing class and social struggle, leaving local chapters and working groups to act on their own, without coordination and leadership.

What all these forces on the radical left do today matters. No single organization is positioned to spearhead a national march on the Supreme Court, but the conditions are in place to bring together organizations on a local and, in some cases, state level committed to building a new movement based on a strategy of independent, mass action. The cohering of such forces will be crucial in determining whether a militant mass movement can defend abortion rights and begin the struggle for real reproductive justice – or whether the right will score yet another victory, rolling back one of the few remaining gains of the struggles of the 1960s and 1970s. 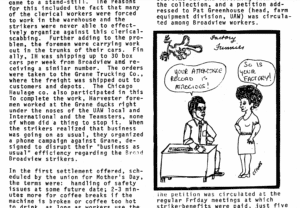 The Limits of White Skin Privilege

Michael Goldfield reflects on his time in the Sojourner Truth Organization to develop a critique of Noel Ignatiev’s theory of white skin privilege. 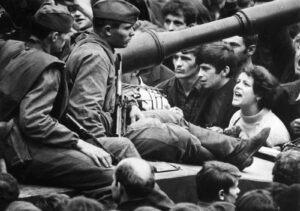 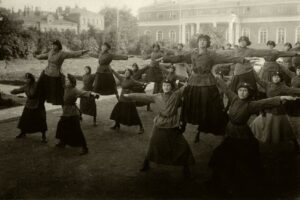 Kyle Kubler addresses the desires and realities of physical culture in the Soviet Union during the period surrounding the October Revolution.