What Do I Tell My Students?

Report from the Barricades

On Thursday, June 4, I sustained injuries at the hands of officers in the New York Police Department, who punched and hit me with batons, cut my face, smashed my phone, smashed my glasses, and left my bike in the street never to be found again. I was left with bruises and scrapes and trauma. Others had their fingers broken, their heads covered in blood.

I know of no gentler words to describe what happened to me than an unprovoked beating. It only compares to the time I was actually jumped by people trying to take my wallet in Philadelphia a few years ago. And there were others who were beaten far worse than I was. I strongly support the passage of the bills mentioned regarding right to record, early intervention systems, and the visibility of badge numbers.

On that evening, I joined the march of protesters in South Williamsburg, starting at McCarren park around 7:30 pm. We marched peaceably around the community. NYPD officers were present on the edges but never verbalized an order to stop marching or protesting, even after the 8:00 pm curfew passed. At no time did I observe any protesters even interact directly with an NYPD officer beyond exchanging glances. We were only using the most powerful weapon we had: our voices in solidarity.

We eventually came to the corner of Penn St. and Wythe Ave. near Bedford Ave.—this was around 9:00 pm. A line of somewhere between one and two hundred officers had formed that kept the group of probably two to three thousand protesters from proceeding. There were about ten feet between protesters and the officers. I walked myself and my bike back about one hundred feet so I was not in front of the line. I had kids to teach the next morning, and I wanted to be there for them. I did not want to risk arrest. I had watched the cops all night. I had watched them in my neighborhood as people marched in Bushwick until 11:30 pm the night before. What I saw and what the Mayor had told us was that the NYPD would not arrest people who were marching peacefully even if it was after curfew.

I was wrong. Very wrong.

At Penn and Wythe we chanted for awhile. Press set up some cameras in the no-man’s-land between NYPD and protesters. At no point did I ever hear the police say “Disperse,” or “You are out past curfew, go home.” There were absolutely no orders from police that I could hear.

After about five minutes, the crowd independently decided to peacefully turn away from the line of officers blocking our path and walk back toward Bedford Ave. Peacefully.

When you are unexpectedly attacked by fists and batons and shouts, your brain actually cannot remember fine details like names or distinct features in a face. Your body’s reaction is to curl into a fetal position and never want to leave it so you protect your vital organs.

I was in the process of turning my bike 180 degrees as the crowd about-faced and, at that moment, walked toward Bedford Ave. Within what felt like only a second, I felt someone coming up behind me, as I turned my head to say “Sorry” and start moving further to the side, three or four white-shirted, I’m thinking mostly white officers, violently shoved me to the ground and started punching and beating me with batons and fists. Then violence and stampeding erupted all around me.

The officers beating me never said the words “You’re under arrest,” or “Get out of here,” or even “Stop resisting.” What they were saying was, “YOU WANTED SMOKE, HUH? YOU GOT IT!” I have no clue what that means, either. The other thing they were saying was “GET HIS PHONE. GET HIS FUCKING PHONE.” Which they did. They snatched it from my hands. I have since recovered it. A member of the community we were in discovered it crushed and under a car only about twenty minutes after I was taken away. I wonder how that happened.

The officers who were beating me were all behind or on the sides of me. I admit now that I could not reasonably identify them. When you are unexpectedly attacked by fists and batons and shouts your brain actually cannot remember fine details like names or distinct features in a face. Your body’s reaction is to curl into a fetal position and never want to leave it so you protect your vital organs. That is what I was doing while they beat me and also tried to pull my hands behind me to ziptie.

Again, I was never told I was being arrested. I was never told once through my entire experience with the NYPD what I was being charged with or why I was being beaten or brought to Brooklyn Central Booking and processed. It all just happened. I had been turning away to start walking home. I thought I was in someone’s way. And then I got attacked by police officers in the NYPD.

One officer picked up my tortoise shell glasses that had fallen in the melee and asked if they were mine. I said yes. He crushed them under his boot. I was ziptied and dragged from my bike, a newly purchased Aventon Mataro. I haven’t seen it since, and no NYPD police precinct has been able to tell me where it could be. I will have to consider it stolen. But who stole it, exactly?

I was hauled onto a bus full of injured people. I and many others were going into panic and screaming for help because the zipties were so tight we could not feel our hands for at least twenty to thirty minutes. I still have numbness throughout my hands indicating nerve damage. A man was dragged to the door of this bus bleeding profusely from a five-to-ten inch wound on his head and was clearly unconscious. The NYPD fought over whether he should go on the arrest bus or be placed into an ambulance. Luckily, after an argument among cops about it, he received medical attention.

I was beaten by the NYPD in an absolutely unprovoked attack. I don’t know if there is video of it, so maybe you will never see it with your own eyes but I felt it in every fiber of my being and I still have the marks to prove it.

I shared a cell overnight with a group of people who were primarily white. I don’t need bail. All I was issued was a court appearance for breaking curfew. All that, for curfew.

I teach middle-schoolers in Bushwick, Brooklyn. The day before members of the NYPD beat me, I and five other colleagues recorded a conversation intended to let students know “You Matter.” All of my beautiful, brave, and ingenious students are students of color. I joined these protests because I worry so much about them being victims of potentially even worse violence than was visited upon me by the hands of the NYPD. In that recorded conversation with my colleagues, we implored our children to always remember to judge each person as an individual, by their individual actions. That assuming that every single person who wears the NYPD uniform was bad, was the same as assuming that every person of a certain skin tone was bad.

What do I tell my students about the individual commanding officer or officers who made the decision that what  happened to me and many hundreds of other people was absolutely OK?

What do I tell my children when they ask me, “But Mr. Chaney, why would they do that? They’re supposed to protect people.”

It is called a struggle because, unfortunately, blood is almost always spilled. I gave a drop. Others who have far less gave far more. But the people always win. And we will again.

And what do I tell my children when they ask me, “But Mister, they can’t do that to you, can they?”

What will I tell my powerful students when they ask me, “Those officers who did that to you will get in trouble, won’t they?”

What do I tell my students when they ask me, “Why do they always get away with this?”

None of those questions have easy answers. But they absolutely should.

In the “You Matter” conversation we recorded for our students, I told them a hard truth. That truth was that the world we often want to be in simply doesn’t exist. But it only doesn’t exist yet. The world we want, the better world, is never, ever given. The long, long struggle for everyday people to have basic human rights, to live, shows this time and time again. Ask any social studies teacher worth their tenure. It would be nice to believe that those changes always came as the result of polite conversation and changes that everybody agreed upon. Wouldn’t that be nice?  But it is called a struggle because, unfortunately, blood is almost always spilled. I gave a drop. Others who have far less gave far more. But the people always win. And we will again.

I told my students to start demanding that better world now. As a friend’s four-year-old proclaimed, “Right now, right now, right now!” I told them that their opinions were the most important  in the world because they are building the next one, the better one.

I told them that they need to keep asking questions and when they don’t like the answers or when nobody will give them an answer, that is when they will know that it is time to formulate the right answer. And I told them that I loved them and that each one of them absolutely could create, formulate, and develop those answers. I’d been training them for exactly that. I told them that they already had the power to demand a better world that they can live and breathe and grow and learn and thrive and dance and sing and play Fortnite and Roblox and watch YouTube without ever having to worry about being under the baton or fist or boot of someone we give the honor of calling a civil servant. 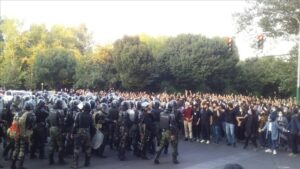 A leftist activist in Iran explains the conditions that led to the latest uprising spreading across the country.